Skip to content
Recent Posts
Categories
The coastal area of ​​Nghi Xuan – Loc Ha will become a tourist, urban and commercial area
It is the orientation in the master plan for the construction of the Nghi Xuan – Loc Ha coastal – urban – commercial area up to 2040, the rate of 1/5000, designed by the Institute for Urban Design (UDI) – Consultant reported at the meeting with leaders of Ha Tinh province (9/7).
Dang Quoc Khanh, chairman of the provincial People’s Committee presided over the meeting. Vice chairperson of the provincial People’s Committee: Dang Quoc Vinh, Dang Ngoc Son together with leaders of relevant departments, sectors 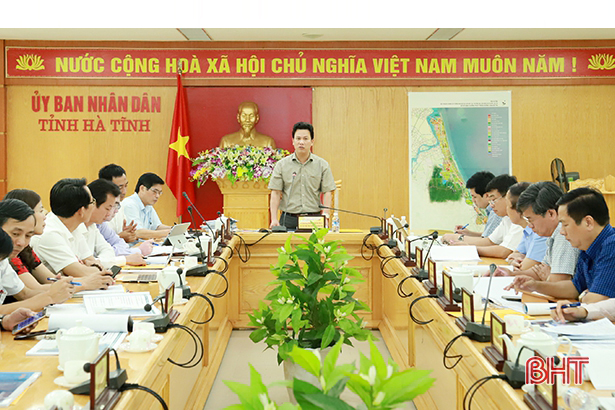 According to the UDI’s presentation, the Nghi Xuan – Loc Ha coastal area is one of the dynamic development areas of Ha Tinh province, especially in the eastern part of the sea. 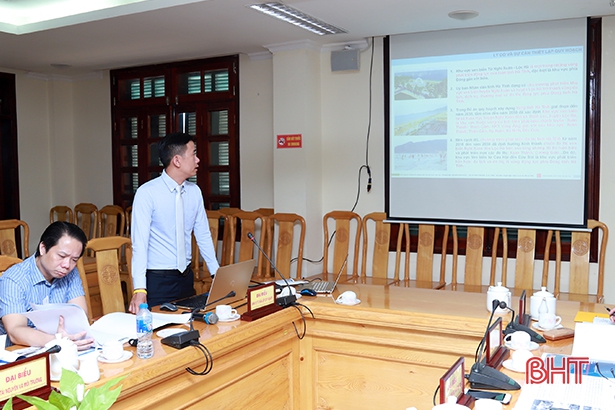 Representatives of UDI consulting units report planning
It will be developed into a tourist, urban, commercial, hi-tech agricultural area; To form new urban centers with convenient connections with areas in Ha Tinh and Vinh; To develop the coastal area of ​​Nghi Xuan – Loc Ha as a tourist and service area. 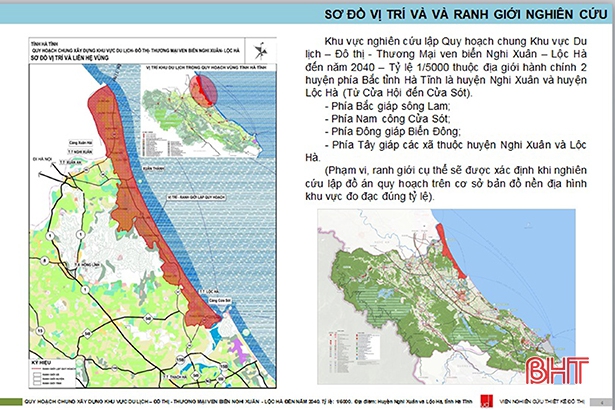 The general planning for the construction of the Nghi Xuan – Loc Ha coastal-urban-commercial area up to 2040
by the UDI as a consultant, T & T Group sponsored funding.
The consultants also set up a plan for coastal space development in three sub-zones: Cua Hoi (4,181 ha), Xuan Thanh (4,502 ha) and Loc Ha (2,802 ha).
Spatial orientation in Cua Hoi will form a mixed-use urban area with urban centers in Xuan Hoi and Xuan Truong: forming a gateway urban area in the Xuan Hoi area linked to the road. Coastal, Ben Thuy 3 bridge connecting to Cua Lo tourist resort and Vinh city.
Xuan Thanh urban area will be developed in Cuong Gian; To develop the tourist center of Xuan Thanh sea with various functions (golf, convalescence, entertainment …)
Party Secretary of Nghi Xuan district Tran Ba ​​Ha: To expand and connect Xuan Hoi urban space with cultural and spiritual tourist spots in the district.
Loc Ha will continue to develop Loc Ha; forming tourist resorts in Thinh Loc; To arrange high-tech agricultural areas in the region; Improve the existing village embellishment, combine the experience travel.
Chairman of Loc Ha People’s Committee Le Trung Phuoc: The planning idea of ​​the consultant has basically coincided with the development of trade and tourism of the locality. Planning Thinh Loc hi-tech agriculture is a good idea.
At the meeting, representatives of departments, localities agreed with the idea of ​​developing the tourist – urban – coastal commercial area – Nghi Xuan – Loc Ha of consulting units.
Director of Department of Construction Tran Xuan Tien: From Xuan Hoi to Loc Ha have different characteristics of economic and cultural, so consultants need to carefully study to have appropriate planning.
According to the delegates, the development orientations proposed by the consultancy unit are basically in line with the orientation and planning of the localities.
Director of Ho Huy Thanh Department of Natural Resources and Environment: The consultant should update regional and local data for accurate data. In addition, the forecast of solid waste advice is low compared to reality, need to re-evaluate.
Delegates also noted that the consultants should study and evaluate the effects of the planning on cultural, spiritual and protective tourism development for a harmonious and sustainable development. Linking regions must have cultural characteristics of the region.
Vice Chairman of the provincial People’s Committee Dang Quoc Vinh: Planning must ensure uniform, localities need to keep planning, do not attract investment in the form of small scattered. To develop tourist and trade urban centers in association with cultural and spiritual tourist spots in the region.
Vice chairperson of the provincial People’s Committee Dang Ngoc Son: It is recommended to further assess the status of the area and clarify the complexity of the complex in three regions in order to attract investment.
Conclusion of the meeting, Chairman of the provincial People’s Committee Dang Quoc Khanh confirmed that the coastal area from Cua Hoi to Cua Son is a mixed development area: tourism, trade and urban areas, the dynamic area in the east of Ha Tinh province. . The consultants have basically planned to meet the development requirements of the province. 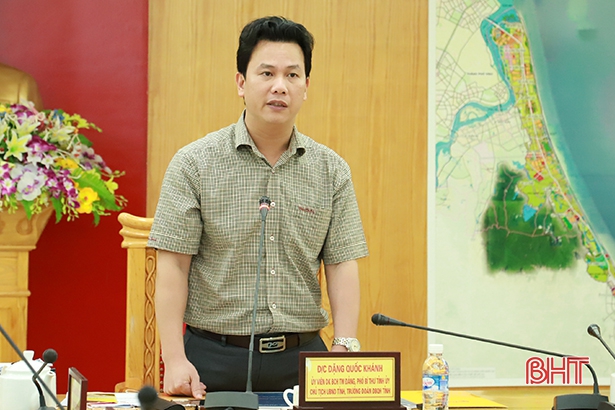 However, the UDI needs to analyze and evaluate the potential and advantages of the locality, especially the connection of three urban areas to cultural and spiritual tourist sites in the province; the development of additional horizontal axis. The issue of water supply, waste water treatment, environmental sanitation also needs to be clarified.
The chairman of the provincial People’s Committee suggested the consultancy units to receive comments from the departments and localities, to further study the relevant plannings of the branches and localities and the development orientations of the provinces. deployment); To re-plan the agricultural production areas and afforestation areas in order to have quality assurance plans.